June 29 – The PA-ACP is joining patients and advocates from across Pennsylvania in thanking state senators for unanimously passing Senate Bill 225, a vital piece of legislation that aims to curb restrictive prior authorization and step therapy (fail first) practices imposed by health insurers.  PA-ACP had made passage of this legislation its top priority for the 2022 legislative session.  The bill has been referred to the House Insurance Committee for consideration in that chamber.

“SB 225 provides much needed transparency, accessibility and consistency to the processes of prior authorization and step therapy,” said Larry Jones, MD, FACP, President of the PA Chapter, American College of Physicians. “The changes included in SB 225 will reduce the administrative time our practices spend each week on prior authorization, significantly improving our ability to treat patients in a timely and medically appropriate manner.”

“PA-ACP is extremely thankful to Sens. Kristin Phillips-Hill, Kim Ward and John DiSanto for their efforts in getting the bill to the finish line in the Senate, and to all the members of the Senate who listened and heard their providers and patients and determined to help resolve many of the issues caused by the prior authorization process,” Jones said. “We look forward to working with House leadership to complete the job of reforming prior authorization in Pennsylvania.”

A practice that started as a method to control costs for experimental or new procedures, prior authorization requires physicians to obtain approval from insurers before prescribing medication or moving forward with a specific treatment. Today, the practice can lead to significant delays in care that contribute to negative outcomes. Step therapy, meanwhile, requires patients to try, and fail, on one or more prescription drug, test or treatment option chosen by their insurance company before approving the one recommended by their physician. This effectively gives an insurer more control than the prescribing provider.

“We applaud Members of the Senate for advancing this important piece of legislation and urge the House to do the same.  Patients need the ability to quickly assess their condition with their medical professionals and find the best course of action for their individual health needs,” said Emma Watson, Director of Government Relations for the American Cancer Society Cancer Action Network. “No patient should face unnecessary barriers to receiving lifesaving medications.  This legislation will streamline and safeguard patient access.”

SB 225, however, will create standards meant to reduce delays from prior authorization and make the process more efficient, and will implement guidelines that make for a clearer route to exceptions from step therapy.

Prior authorization and step therapy are often applied to patients living with a wide range of diseases and chronic conditions, such as cancer, diabetes, HIV/AIDS, heart disease, arthritis, and multiple sclerosis. Not only have these prior authorization  practices impacted patient outcomes, but they have undermined the patient-provider relationship and delayed access to needed treatment which may result in worsened symptoms and associated higher healthcare costs.

The Coalition to Improve Prior Authorization and Step Therapy for Pennsylvanians 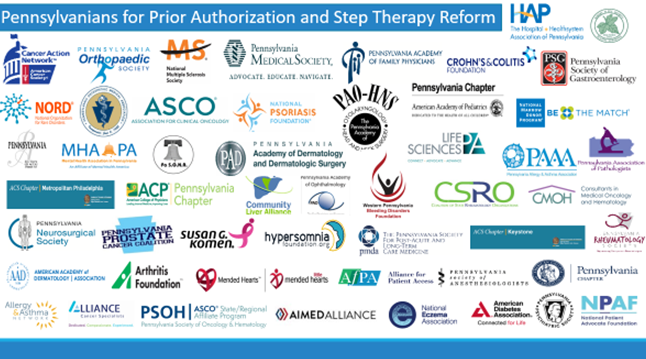