Pennsylvania’s COVID-19 positivity rate for the period of Aug. 28 through Sept. 3 had increased to 4 percent, compared to 3.2 percent for the 7-day period a week earlier.

That rate is still below the 5-percent threshold which state officials say represents a concerning level of virus transmission, but was a significant jump in one week, after several weeks of gradual decline.

The DoH noted increases due to outbreaks in Allegheny, Philadelphia and York counties.  Given the data released by the department, restaurants and bars don’t seem to be the primary source of virus transmission, nor does the crackdown on them appear to be having the desired effect.

Going into the Labor Day weekend, the DoH had indicated an increasing number of new virus cases may be due to mass gatherings, based on contact tracing data.  And with schools and colleges reopening, additional testing is being conducted and students are congregating.  But the inability or refusal of the Department to release specifics makes it virtually impossible to assign cause.

That said, as of midnight on Labor Day, there were 547 additional positive cases of COVID-19, bringing the statewide total to 139,863. Approximately 9,901 of Pennsylvania’s total cases are among health care workers.

Pennsylvania’s total deaths attributed to COVID-19 now total 7,780, an overnight increase of 20. County-specific information and a statewide map are available on the COVID-19 Data Dashboard.

There are 71 cases who had a positive viral antigen test and are considered probable cases and 646 patients who have a positive serology test and either COVID-19 symptoms or a high-risk exposure.

At least 1,608,378 patients had tested negative by Labor Day. Of the patients who have tested positive to date the age breakdown is as follows:

The latest information for individuals and businesses, is online “Responding to COVID-19” on pa.gov. 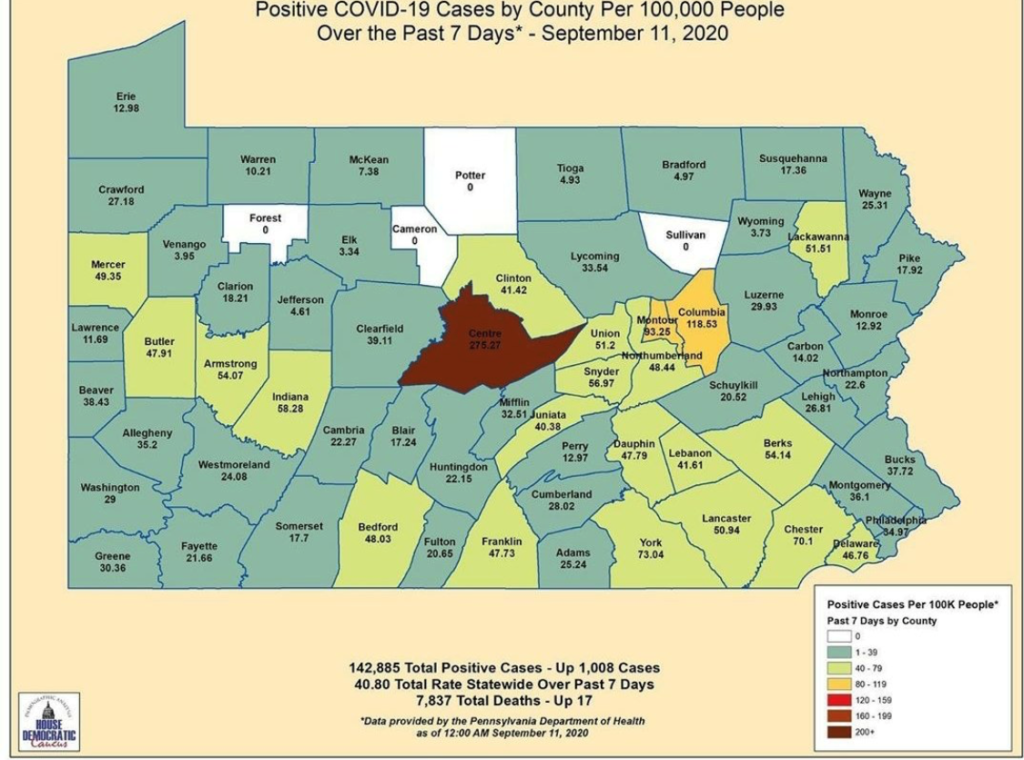