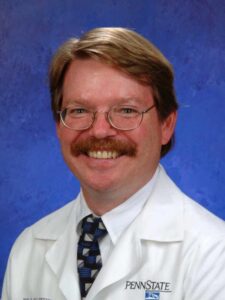 Noel Ballentine obtained his BS degree in Chemistry from the University of North Carolina.  He attended medical school at the same institution and his residency in Internal Medicine/Primary Care at the Milton S. Hershey Medical Center, Pennsylvania State University.  In 1982 he began private practice as a solo internist in NW Connecticut performing traditional internal medicine with outpatient, inpatient and nursing home care.

He returned to Hershey Medical Center in 1992 with the Division of General Internal Medicine practicing primary care and co-directing a new internal medicine practice for Penn State.  He taught residents and medical students primary care medicine.

This practice which began with three physicians now has evolved and grown in size and reputation with dozens of physicians, several physician assistants and represents the entire ambulatory teaching practice site for the entire internal medicine residency program.  He was able to achieve board certification in Geriatrics based on extensive experience which allowed him to sit for the board exam and grandfathered into the specialty.  He has developed a geriatric teaching clinic for residents and medical students, including creating the curriculum for a fourth year geriatric elective which he directs.  Many students have remarked it is the best elective they took in medical school.  A number have continued on to practice geriatric medicine. He fostered the development of the Division of Geriatric Medicine including a fellowship program in geriatrics.

He remains clinically active with a large geriatric practice and the further development of geriatric education for internal medicine physicians.