The 60-page file is the most extensive guidance yet for how various institutions should open safely. It was quietly published on Sunday without any announcement and there is no indication as to what material is new.

It comes well after most states lifted stay-at-home orders, but before Pennsylvania has made that move.  The White House and CDC tussled for weeks over the details and how much the administration should influence institutions’ decision-making, delaying its release. States charged ahead in the meantime, with the vast majority either well into their phased reopening or planning to ease restrictions within the week.

PA COVID-19 DATA UPDATE
On Wednesday, the Department of Health reported that Pennsylvania had reported 610 new confirmed positive cases in the previous 24 hours, for a total of 64,412 confirmed cases.

There were 293,244 negative tests in PA as of midnight Tuesday night. 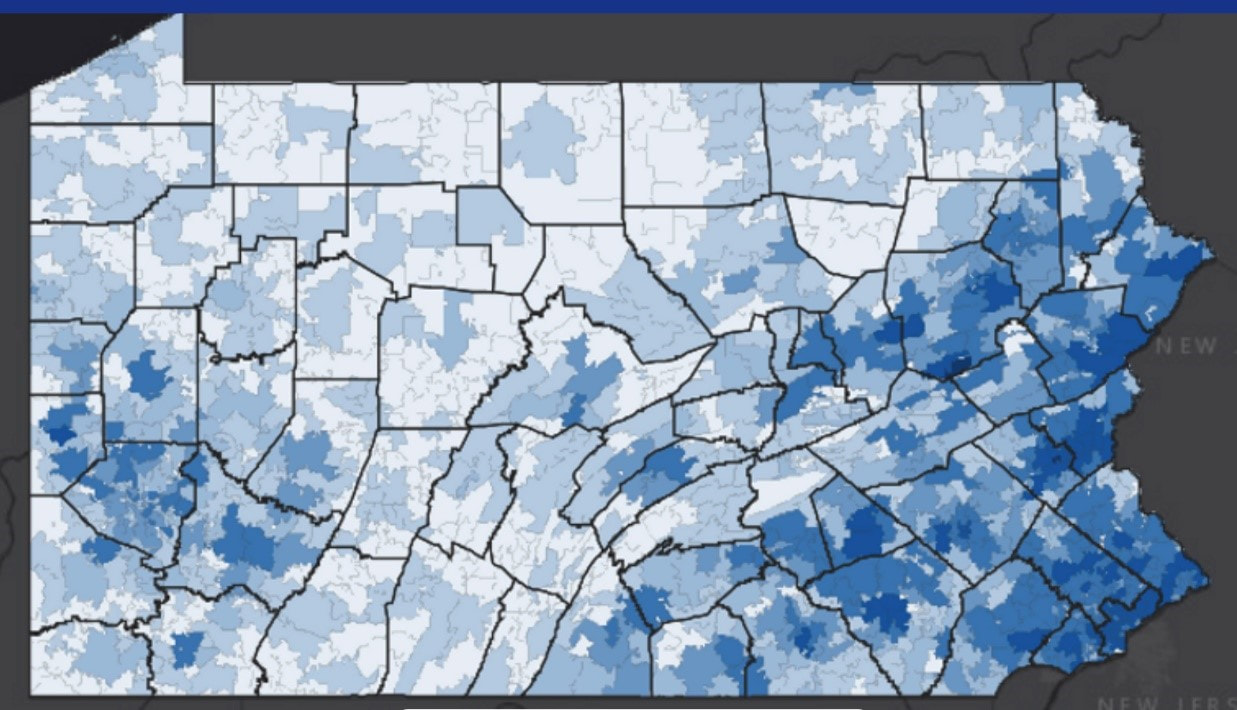 Governor Wolf Hosts Press Call Regarding Covid-19
Gov. Wolf began by noting that on Friday 49 of 67 counties will enter the yellow phase of reopening. He said he is working to allow Pennsylvanians to return to normal life as quickly and safely as possible.

Democrats and Republicans both sent you letters requesting curbside pickup be allowed for retail stores across the state. Is this something you are considering doing? Wolf noted that curbside pickup is permitted at all retail stores in the 49 counties in the yellow phase. He said he is not going to allow nonessential stores in red phase counties to reopen for curbside pickup. “Both caucuses are interested in this but in the interest of trying to keep people safe I’m looking at every opportunity to keep people from congregating,” he said. He added he may reconsider at a later point in time if the transmission rate in red phase counties continues to fall.

Last week two infectious disease specialists from the Lehigh Valley area said that Northampton and Lehigh counties should be able to reopen with proper precautions. Have you heard from any other infectious disease specialists who believe restrictions should be looser statewide? Do you have anything to say about the Lehigh Valley situation? WOLF: Obviously, you hear about being more restrictive or less restrictive pretty much anytime you look at anything on the internet,” Gov. Wolf said. He added his office talks regularly with local, state, and federal public health officials, but none of them have suggested changing restrictions. He repeated that his goal is to reopen that state responsibly.

Have you personally visited a nursing home to see the conditions firsthand? WOLF:  I have  not visited any nursing homes.

What is the state doing to separate COVID-19 patients from healthy seniors that have to stay in nursing homes? WOLF:  Center for Disease Control and Prevention (CDC) guidelines are being followed, although it will take the state until June 1 to test all nursing home residents and staff, several days past CDC’s May 25 deadline. Nursing home employees do have adequate personal protective equipment (PPE). I am not aware of any rules forcing someone to stay in a nursing home, although “there are directives to shelter in place, so you need to shelter somewhere.”

Have the conversations you have had with other governors in the northeast regional partnership guided any of your recent decisions? Has anything a neighboring state has done influenced your decision-making? WOLF: Staff members from the offices of the seven governors in the partnership meet twice a week. He added he has regularly been on calls with other governors, including conference calls with President Donald Trump and Vice President Mike Pence. “I’m taking ideas from wherever I can get them.  The model from Carnegie Mellon University which Pennsylvania is using is available on the Department of Health’s (DOH) website. I have looked at the metrics New York is using, and they appear to be similar to the ones we are.

What do you say to people who are concerned that the mail-in ballots are prone to fraud? WOLF: I did hear that President Trump is concerned about vote-by-mail voter fraud, but he added that he also heard that President Trump votes by mail. He noted that 200,000 Pennsylvanians typically vote absentee, but the state has received over 1.5 million requests for mail-in ballots for the June 2 primary. “The opportunity for fraud is pretty limited.” Some people have received two ballots in the mail but said that ballot counting machines would not accept two ballots from the same voter. “It’s much more convenient than having to get up on one day and voting in the traditional manner,” he said. Pennsylvanians have 50 days to vote, which is more than any other state. Voting by mail is a “really good, easy, safe and reliable way to cast a ballot this year.”

Do you see large gatherings such as concerts happening in Pennsylvania if a vaccine is not in place? WOLF:  It will depend on what the citizens of Pennsylvania want to do. He added he does not expect Pennsylvanians to be comfortable with returning to normal shopping, work, or school until there is a vaccine. He noted Pennsylvania has increased the number of tests being administered daily from 6,000 to 11,000. Contact tracing, antibody testing, and a quicker turn around on COVID-19 tests are important but will not replace a vaccine. “Ultimately I think what it’s going to take for everybody to feel safe going to a Penn State game or a basketball game is that they have some confidence that they aren’t going to get sick by being in close contact with anyone else,” I do not expect Pennsylvanians to have that confidence until a reliable vaccine is available. Pennsylvania’s actions prevented the health care system from being overwhelmed and a study by Drexel University said the shutdown order saved 7,000 lives in Philadelphia alone. Pennsylvanians are not ready to resume normal activity. I was told by a Pittsburgh resident that three days after the area entered the yellow phase Pittsburgh’s streets were still empty. I do not think Pennsylvanians are going to be ready to fully return to normal activity without a vaccine nor increased contact tracing.

Do you have any guidance for people organizing fairs for the summer?  WOLF:  Fairs should not take place in red phase counties. In yellow phase counties fairs can be held if people wear masks, follow social distancing guidelines and prevent groups of more than 25 people from congregating in one area of the fair. The state is trying to issue guidelines that are consistent and applicable to not just fairs but also sports games and other events. “We want to get to the point where we have guidance that everyone can use in the same situation,” The fair planned in York County could continue. “To the extent you could practice social distancing, the York fair is going to be fine. To the extent that you pack people into the grandstand, that’s going to be a problem.”  Again, you must understand that it is the virus that is “constraining our behavior.”

Why did you veto a bill that would open real estate services and then issue an executive order that allowed real estate workers to return to work? Are you worried about your use of executive power setting a precedent? WOLF: The bill was flawed because it allowed businesses to open without obtaining local licenses and permits. The Pennsylvania State Association of Township Supervisors did not support the bill.  It is time to begin reopening real estate, but I did that by executive order because there was “something in the bill that was not right.”

Do you feel the nursing home information released yesterday by DOH is accurate? What are you doing to make sure it is accurate?  WOLF:  I was surprised that people were saying it is not accurate. “I’ve been going under the assumption that it is.

Why are the numbers being reported by the Lancaster County Coroner different than the numbers reported by DOH?  WOLF:  I am unaware of the difference.  My office will look into it.

Have you signed the bill allowing cocktails to be served to-go yet? WOLF:  I am planning to sign the legislation tomorrow or Friday.

Why do you think serving cocktails to-go is a good idea?  WOLF:  I am not sure it is a good idea, but it passed unanimously in the legislature. “When I see that it seems the representatives of the people are speaking clearly.  If I were doing it myself I might do it differently, but I think there seems to be very strong support for it and I am willing to concede to that.

What is the standard for joining other states in getting professional sports teams playing again? WOLF:  We are working with professional leagues from multiple sports to plan how the state can move to “som
e resemblance of normalcy.” I will be releasing more guidelines for professional sports soon. “There are so many different activities out there that we need to make sure we are providing guidelines that are consistent and actually make sense.  It is ultimately going to be up to the players to decide whether they feel safe enough to return to their sport. I will continue to work with professional sports leagues to facilitate a safe environment for sports games.

DoH releases guidance for resumption of elective surgeries, procedures, admissions
The Department of Health on Wednesday released new guidance to provide a process for hospitals + ambulatory surgery facilities to resume elective surgeries, procedures + admissions.  Facilities can move forward as long as safety of patients + staff isn't jeopardized + they are able to respond to #COVID19 emergencies.

For nearly six weeks, hospital systems across the commonwealth halted all non-essential surgeries, so resuming scheduled services will not be as easy as flipping the switch.

The new system allows laboratories to test patients for SARS-CoV2. Laboratories performing the test can bill Medicare and other health insurers for services that occurred after February 4, 2020, using the newly created HCPCS code (U0001). This code is only to be used for the tests developed by the Centers for Disease Control and Prevention (CDC). Laboratories performing non-CDC laboratory tests for SARS-CoV-2/2019- nCoV (COVID-19) can bill for them using a different HCPCS code (U0002).

CPT code 87635 was created for infectious agent detection by nucleic acid tests as well as CPT codes 86769 and 86328 for serology tests.

Laboratories performing these tests may bill Medicare for services that occurred after their respective effective dates. Local Medicare Administrative Contractors (MACs) are responsible for developing the payment amount for claims they receive for these newly created HCPCS codes in their respective jurisdictions until Medicare establishes national payment rates.

As with other laboratory tests, there is generally no beneficiary cost sharing under Original Medicare.

The payment amounts are identified below: