Governor Wolf announces more counties moving from red to yellow
On Friday, the Governor announced that 12 counties – Adams, Beaver, Carbon, Juniata, Mifflin, Perry, Susquehanna, Wyoming, Wayne and York Counties will all be able to transition to the yellow phase of reopening on May 22.

This will bring the state total of yellow phase counties to 49 of the 67 counties. 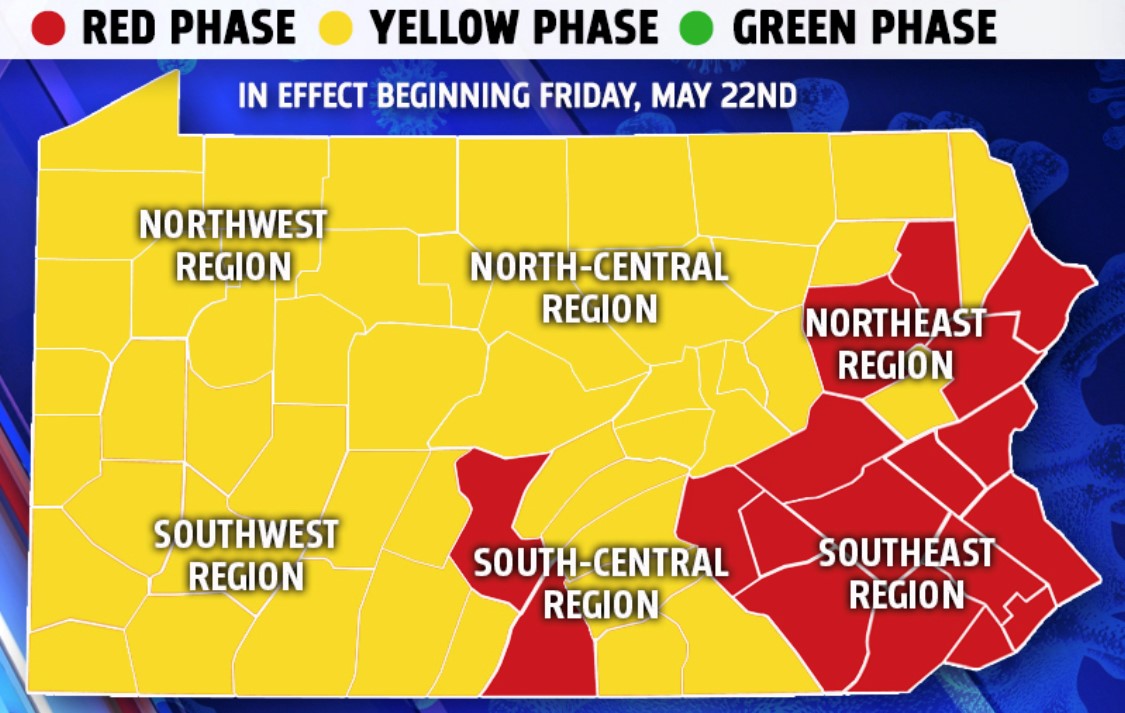 ​Wolf said, “As the leader of this commonwealth, I’m responsible for the health and safety of all Pennsylvanians, and I can’t and I will not let this virus ravage our communities – so I’ve got to take seriously the advice of scientists, of medical professionals and our epidemiologists, and that includes information laid out in the Carnegie Mellon University risk-based decision support tool report.”

He said data from the CMU model will be made publicly available twice a week “to help Pennsylvanians understand the risk factor where they live.” He continued to remind all that there are other subjective factors involving information from health professionals and experts that also weigh on whether counties are advanced through the reopening phases.

During the past week, several health care experts from around the state – including those with the University of Pittsburgh Medical Center (UPMC) Health System, the Penn State Health Milton S. Hershey Medical Center, the St. Luke’s University Health Network and the Lehigh Valley Health Network – have stated what they’re seeing on the front lines of the outbreak suggests most of the commonwealth can safely move to the “yellow” phase.

PA COVID-19 DATA UPDATE
On Friday, the Department of Health reported that Pennsylvania had reported 986 new confirmed positive cases in the previous 24 hours, for a total of 60, 622 confirmed cases.

The death total rose to 4,342 confirmed COVID-19 deaths, an increase of 124 from Thursday’s report, all in adult patients.  2,991 of the state’s deaths, 69 percent, were nursing home residents.  There were 259,210 negative tests in PA as of midnight Thursday night.

At least 4,349 positive  cases in health care workers – accounting for about four percent of all positive cases.  The total figure includes 2,039 workers in nursing homes.  12,937 residents – accounting for 20 percent of all cases- are in 550 of the state’s long-term care living facilities in 45 counties.  Another 2,369 positive cases are in the food industry in 150 facilities.

Levine said the spread of COVID-19 in Pennsylvania has peaked.  She said testing, contact tracing, case investigations and  outbreak responses are on track in all counties that went from red to yellow last week.
Scroll To Top